Fandom Classics Part 162: The Moon, The Flower, And The Door 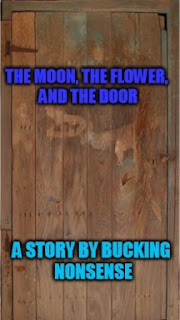 So, I've been tipped off to an interesting literary hack: if you find Lovecraft's prose too dense to slog through, try replacing every adjective and adverb with "spooky."  Comprehensibility is improved, and the meaning barely changes!  Plus, you get wonderful paragraphs like this one from The Call of Cthulhu:


In a spooky glade of the swamp stood a spooky island of perhaps an acre’s extent, clear of trees and spookily dry. On this now leaped and twisted a more spooky horde of human spookiness than any but a Sime or an Angarola could paint. Void of clothing, this spooky spawn were braying, bellowing, and writhing about a spooky ring-shaped bonfire; in the centre of which, revealed by spooky rifts in the curtain of flame, stood a spooky granite monolith some eight feet in height; on top of which, spooky with its spookiness, rested the spooky spooky statuette.

Feel free to try it out for yourself; enjoy!  Also, enjoy my review of Bucking Nonsense's The Moon, The Flower, And The Door, below the break.

Impressions before reading:  Mostly what I know about this story is that the author abruptly abandoned the sequel because it was extremely controversial with the readers--the reasons for which I haven't familiarized myself, so no comment there.  Still, I must admit that it doesn't paint a particularly positive impression going in.  Also, I'm pretty sure I know what's going to happen in this story just from reading the description and chapter title; hopefully either I'm wrong, or there's more to the story than a single "twist."

Zero-ish spoiler summary:  Luna is trying to find a student by giving every prospective one a simple test: she stands them in front of a door, and tells them that the test is over when they open it.  So far, every foal has failed; now, it's Morning Glory's turn.

Thoughts after reading:  Let's start with what I was afraid would happen: that I would end up reading 4500 words of build up to Morning Glory standing in front of those doors, and realizing that the Princess's words were a warning rather than a set of instructions.  The good news here is that that didn't happen.

Oh, make no mistake: the realization of what Princess Luna's actually saying is still a key point in the story, but it's not particularly presented as a twist to the reader (to the foals, sure, but not the reader), and it comes early on; instead, the story focuses on Glory reasoning out the test itself, and on Luna's intentions and desires.  Casting this first and foremost as a character piece rather than primarily as a puzzle is definitely the right choice for this particular piece, where the puzzle itself isn't enough to carry the story, but is perfectly suitable as a vehicle for character exploration.

Unfortunately, Morning Glory ends up being something of a disappointment in this regard.  She's awfully generic as a protagonist for a fic of this sort, and all of her biographical and personal details are exactly what you would expect of "student who takes the inobvious path and is rewarded."  Beyond those characteristics, she's basically a blank slate: a ball of unpresuming curiosity and wisdom, expressed as little more than that.  Luna, by contrast, gets a much more nuanced, distinct treatment.  I'm not sure if this was entirely intentional--without getting into her precise motives in the story (which, unlike talking about the test itself, would be kind of spoilery), they don't align quite perfectly with the test she created, and the suggestion that she's subconciously sabotaging herself/working toward a different goal with her student than the stated one gives her a pleasant bit of ambiguity.

The writing is well-edited, and in general terms is a plus: Bucking Nonsense demonstrates a keen ability to describe things quickly and concisely, which allows the reader to focus on the characters' dialogue without reducing the story to talking heads.  However, sentence-level pacing is something of a weak point, with a lot of technically-correct sentences that would nevertheless benefit from being rewritten to avoid quite so many starts and stops.  Take this paragraph as a representative example:


Thunderclap pulled his head back into the hallway beyond quickly, and a moment later, walked in, escorting the earth pony filly in question. As the captain took his position by the exit, Luna studied the latest applicant. Admittedly, she was a cute little thing, if a little on the skinny side. That in itself was a bit unusual: Barring a few unique examples, most colts and fillies either sat right at the ideal body weight for their age, or were somewhere above it, and almost never below it.

Again, there's nothing that's structurally incorrect here (well, aside from the miscapitalization of "Barring," but that's not a representative flaw).  But it would be easy to rewrite the first sentence, for example, to avoid having three commas in such close proximity, or to move around the "admittedly" that leads off the third sentence so as to create two cohesive clauses rather than two plus an interjection which adds no information (but does inform the tenor of the narration; hence my suggestion to move it, rather than delete it).  Collectively, this makes the story feel much more herky-jerk than it actually is at the narrative level.

Thunderclap pulled his head back into the hallway beyond spookily, and a moment later, walked in, escorting the earth pony filly in question. As the captain took his position by the exit, Luna studied the spookiest applicant. Admittedly, she was a spooky spooky thing, if a little on the spooky side. That in itself was a bit unusual: Barring a few spooky examples, most colts and fillies either sat right at the spooky body weight for their age, or were somewhere above it, and almost never below it.


Recommendation:  If you like the idea of the test and are curious why Luna would use it in the first place, this would be a good choice of story for you.  It might not be for readers looking for much more than a form-fit tabula rasa out of the non-Luna half of that equation, though.

Next time:  Twilight Sparkle Gets A Free Salad, by AestheticB
Posted by Chris at 12:00 AM